Chinmaya Mission San Diego (CMSD) was inaugurated on January 28, 2001 in the presence of Swami Ishwarananda, Acharya of Chinmaya Mission Southern California. The lamp of Chinmaya that was lit with thirty five children and about fifty adults is now leading the way to spiritual growth for over hundred and eighty families with more than two hundred and thirty Bala Vihar children and Youth. Various programs are conducted throughout the week and the weekend for children, youth and adults. Programs include Bala Vihar/Yuva Kendra, Bhagavad Gita Chanting, Language Classes, Chinmaya Dhvani (Youth Choir), Adult Vedanta & Bhagavad Gita Classes, Adult Study Groups, Devi Groups and Vedic Chanting. CMSD also participates in Community Outreach programs ranging from providing food and clothing for the homeless shelter, to presentations and symposiums on Hinduism at schools, interfaith organizations and other interested groups.

Hari Om! Very hearty congratulations to all the members of Chinmaya Mission San Diego. I am very pleased to know that you will be celebrating the fifth anniversary of the center. The light of spiritual knowledge given by our Pujya Gurudev has reached here and should be kept glowing forever. The new center that will be coming up here in the very near future, we will call it Chinmaya Jyoti. Hari Om!

That was the message from Pujya Guruji Swami Tejomayanandaji in a previously recorded segment of a video presentation as CMSD celebrated its fifth anniversary on January 28, 2006 with a gala banquet. The banquet hall was filled to capacity as members of Chinmaya Mission San Diego, along with guests from centers in Los Angeles, Bakersfield, San Jose and Phoenix, joined with family and friends to commemorate this momentous milestone at Ker, Little India in San Diego. Swami Ishwarananda, resident Acharya of Chinmaya Mission Tustin, along with Brahmachari Girish Chaitanya, resident Acharya of Chinmaya Mission Los Angeles, were greeted at the entrance to the hall with the traditional ceremonies of welcome to the chanting of the Vedic arati. As he strode to the front of the hall, the Bala Vihar children were lined up on either side of his path, enthusiastically chanting the Guru stotram. After the welcome address by Srinivas Sukumar, the adult and youth Chinmaya Dhvani choir group, led by Lakshmi Sukumar, began the evening with an invocation to Lord Ganesa, followed by the song Jayati jayati Bharata Mata, in praise of Mother India. A third selection- Chinmaya Bala Vihar layega navinata- by the children was a moving tribute to Pujya Gurudev as students pledged their resolve to spread the message of Vasudhaiva kutumbakam and keep the culture of Bharat alive. Next was a video documentary entitled "Tasya Bhasa Sarvamidam Vibhati" (In His light all else shines) chronicling the history and various activities and programs of CMSD over the past five years. The video included interviews with Lakshmi and Srinivas Sukumar, about the process of starting a center in San Diego. The comments and reflections of many sevaks, parents and children were incorporated to demonstrate how the mission had influenced their lives and what they had absorbed from its teachings. There was a moving interview with Nandini and Venkat Rangan of San Diego, whose home Gurudev was visiting before suddenly falling ill. San Diego is regarded with special reverence as the place where Pujya Gurudev attained Mahasamadhi on August 3, 1993. The video ended with the message from Pujya Swami Tejomayanandaji, followed by a sequence of lamps being lit to the lilting melody "Jyota Se Jyota Jagate Chalo, Prem Ki Ganga Bahate Chalo". ("Let the Ganga of love flow forever by continuing to kindle light with light."). Swami Ishwaranandaji congratulated CMSD and stated that San Diego is a holy place where many Saints Die and Go. He said that Chinmaya Jyoti - meaning Flame of Consciousness- is the most appropriate name for the center to come up here. He also said that over 300 Chinmaya Mission centers worldwide are eagerly awaiting Chinmaya Jyoti. Swamiji announced the goal of establishing a permanent center in San Diego by the year 2008 and urged the members of CMSD to do their utmost to reach this goal. Br.Girish Chaitanya then recounted his student days at the Sandeepany Sadhanalaya in Mumbai. His Acharya, Swami Ishwaranandaji, had taken him and his classmates on a journey to Uttarkasi, where Gurudev studied at the feet of his master, Swami Tapovan Maharaj. Br. Girishji recalled Swamiji’s referring to Uttarkasi as Chinmayottari, where the river Ganga commenced flowing down in the form of Swami Chinmayananda, who left to bring the message of Vedanta to the people. Br. Girishji said that San Diego then becomes Ganga Sagar, the place where that river merged into the ocean. Pranji Lodhia, member of the board of Chinmaya Mission West and CMSD secretary said that it is a privilege to be a part of the loving, close-knit CMSD family and the Chinmaya family at large. He said that Chinmaya Jyoti would be a fitting tribute to our Pujya Gurudev. Harish Babla of CMSD took the podium to present the plans towards building a Center. He outlined well-thought out strategies to collect the necessary funds to cover the cost of constructing and furnishing a space large enough to accommodate the growth of CMSD, which at the end of 2005 comprised 101 families and over 150 Bala Vihar students. The Yuva sevaks assisted in serving a course of appetizers as a prelude to a sumptuous buffet style dinner to the accompaniment of melodious bhajans sung by Ashok Bhatt. At the conclusion of dinner, Bala Vihar sevak P. Neelakantan warmly thanked the Sukumars for their tremendous efforts and tireless energy and dedication towards fostering and sustaining the Mission over the past five years. The evening concluded with a raffle. Ten prizes had been selected, including airline tickets to India, Bhagavad Gita and Bhagavatam DVDs, a laptop computer, a plasma TV, an iPod, and an Xbox 360. Swamiji and other guests drew the winning tickets. One of the winners generously donated his prize back to the Mission. Finally, each Bala Vihar child was presented a beautiful scroll inscribed with the Chinmaya Mission pledge to take home as a memento of the occasion. The banquet was a great success, due in no small part to the efforts of the Sukumars and a contingent of volunteers who helped with the various aspects of planning, organization and preparation. We hope to enjoy many more years of growth and development in a place of our own, where we may continue to carry out the dedicated work begun by our beloved Gurudev so many years ago. Together we will keep Chinmaya Jyoti glowing! 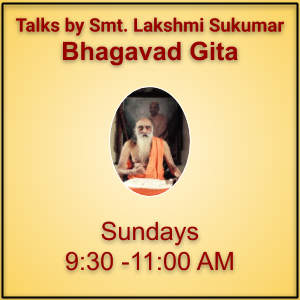 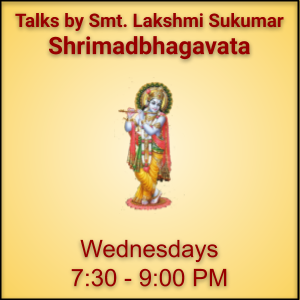 "It is vain to waste one's time, considering which God to worship. Worship Him in any form. It is the sincerity of devotion that matters." - Pujya Gurudev Swami Chinmayananda Saraswati.